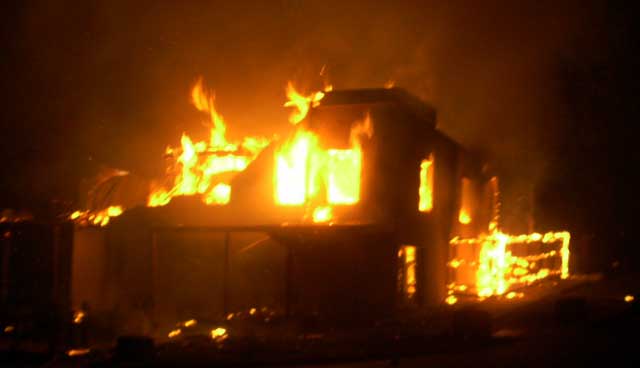 When a human or animal cries for help the instinct of a compassionate community is to do what they can. People in Marysville showed that spirit on Black Saturday, aware that an immense fire was about to descend on our town.

The fire started at 3 pm at Murrindindi old mill, fifty kilometres to the north-west and half an hour later smoke began to billow behind Mt. Gordon. The mountain is several kilometres away from where Marysville is nestled in a valley and it blocks the view out west. By 4:30 the firestorm had razed Narbethong to the ground, a mere ten kilometres westward. The only information was on the local radio, being that the settlement was "being impacted by direct ember attack". The winds were gusting and at 5:15 we lost power in Marysville, by which time the western half of the sky and the sun were blocked out by the massive smoke clouds.

Bev McGeary, a middle-aged masseur, was heading to a friend's house with her cats at 5:30 when a massive tree blew down on her car, on the corner of Lyell and Sedgwick Streets. The front half of the passenger compartment was crushed and she was pinned inside, bleeding from a head wound. 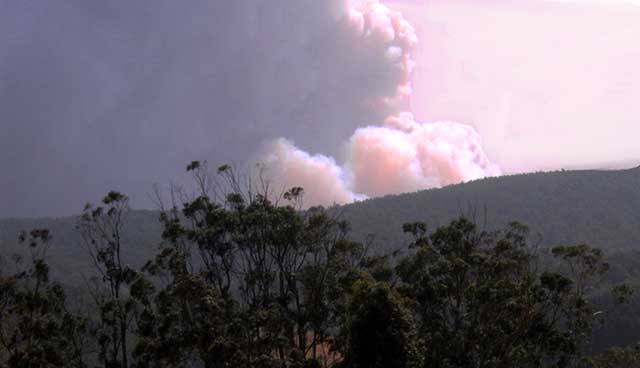 Within minutes a cross-section of the town was working methodically to free her. Craig Hoskins, who lived nearby, was chainsawing branches off the roof, whilst Bruce Morrow had returned with a borrowed crowbar, attempting to pry the door open. Bruce had yet to evacuate with his family, sparing little thought for the twelve uninsured properties he owned. Adrian Lloyd, the RACV mechanic, was assisting, and the full story of his efforts to evacuate the town were only revealed to myself much later.

Also passing by was Andrew Woollard, on his way to get a friend's dog before leaving with his family. His wife had been through Ash Wednesday and knew it was time to flee. Andrew, an off-duty Melbourne ambulance officer, was bandaging Bev's head when I returned from the lookout above town, now aware that spotfires were only a few kilometres away and heading our way. As the town's doctor, I began to assess her injuries. She was concussed and kept asking "Where are my cats? Where is my mother?"

Visiting from Warburton with her family was a nurse, Julie Bell, who reassured Bev and went up the street to her empty house, from which old Grace had earlier left. Julie was renting accommodation for the night and they were later so grateful that I told them to leave. Over the years I had said hello to part-time residents in that street, Veronica and Andrew, but there at the crumpled car we exchanged names, scarcely noticing the forty-six degree heat. "I'll take your cats in their cages," offered Veronica, unaware that the policy on their home had not been renewed. I couldn't help noticing the "Relaxation Therapy" sign on her car and muttered, "I don't think lavender oils will be sufficient here." 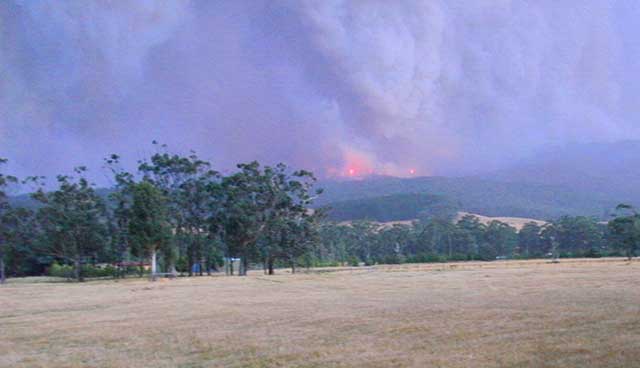 The volunteer SES crew of Ian Walter, Keith Ray and Jo Hunter were unable to use the "jaws of life" to open the door because the extreme heat caused an air bubble in the hydraulics. I was still in shorts and thongs, having wasted two hours trying to find out if the fires were coming to Marysville, keen to get up the street to my home and prepare for the imminent onslaught. Little did I know that my house, and nearly the entire town, would burn to the ground. "Can't you tie the winch around the door handle and pull it off?" That was not the correct approach, so, with my approval, we would pull her out the back door.

Volunteer Marysville ambulance officers Dennis Brown, David Alleway and Anne Hunter had arrived and they secured a neck brace and back board onto Bev, before she was pulled to safety and whisked away to Alexandra Hospital, half an hour to the north. She could well have died in that car, and I was happy to see her twenty-four hours later recovering at Shepparton Hospital casualty, myself in transit to Melbourne with severed thumb tendons from fighting my house fire.

All these volunteers stuck to their posts and lost their homes and most or all of their possessions, as did many firefighters. Only the Alleway's home survived, undefended but fortunate the way the fire turned on the road to Buxton. Any plans people had to stay and defend were soon changed due to the ferocity of the bushfire.

The SES crew had earlier helped clear trees off the road to Buxton and used a list of elderly residents to check if they had left, several of whom did need assistance. Local policeman Kevin Graeme, who was on leave, had compiled that list some years earlier. The car accident occupied them for nearly forty-five minutes, till just before 6:30. Ian Thompson, the policeman on duty, had been busy with the CFA as the fires approached Marysville, and then warned some residents to leave. He was joined by the constable from Woods Point, over an hour through the mountains to the east, at 5:30 and the police from Alexandra not till 6:15. Half an hour later those people sheltering on the oval were evacuated in a convoy of fifty cars to Alexandra with the police and SES, as the inferno swept through the town.

By 7:30 most of the buildings were ablaze, including my home, and the town water supply had stopped. With my dogs I reached the safety of the Gallipoli Park oval, where there were twenty or so battered locals and perhaps forty volunteer CFA and DSE firefighters, all in shock from our perilous escapes and aware that the town had been lost. A spot fire had spread west from the flanks at 6:15 and there near Kings Road the firefighters had set a backburn to protect the town. Alas, the deadly south-west wind change had been predicted that morning to arrive in the early evening. With fire surrounding Marysville on three sides, at 6:40 the wind turned ninety degrees and concentrated the blaze into an unstoppable firestorm with embers by the millions, fanned by horrendous winds. The crews lost a tanker and were so fortunate to survive. 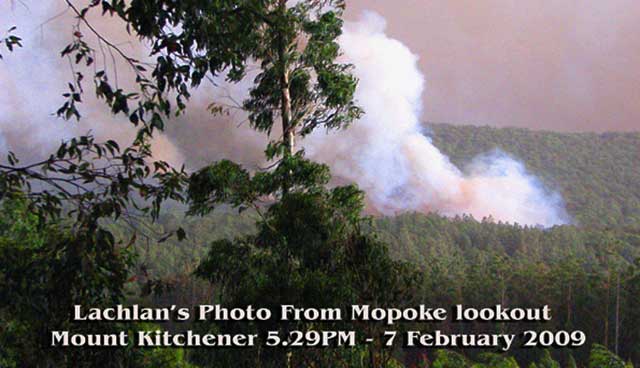 There on the oval was Adrian Lloyd, the mumbling fast-talking RACV mechanic, with three dogs and a cat. From the massive smoke plumes that afternoon he knew we were in trouble. Years ago neighbours at Eildon had left it too late to evacuate and had died on the road. Before 5 pm he was called out to start a car at Narbethong but met fires halfway and had to turn back. With his dogs and cat onboard, he urged those at the trout farm to get out, repeating the message to his family by phone. Dave Livingstone rang from Melbourne and got him to drive to Buxton to bundle his German shepherd into the car. On returning to Marysville he saw Pat and Angela Davies, with ten other adults and kids, drinking beer on the balcony, believing that the smoke was the fire away at Kilmore and Kinglake. "Come out here and have a look!" Adrian urged. The smoke on the ridge half a kilometre above them made Pat swear, and as the last of the group later fled the house caught fire.

Back in Darwin Street, close to 6 pm, he saw elderly John Carpenter squirting a hose. "That won't do any good. Get out of there!" Other neighbours were on their roof and Adrian yelled at them, "Get down the oval quick!" Another couple was going to the Cumberland and were told "Don't go there - it's not a refuge." Sadly the wife of that couple perished there. He assisted at the squashed car in Lyell Street, then drove past people on either side of Sedgwick Street. "What are you doing?! Get out of here! Go down the oval!" he pleaded. Down Kings Road, he repeated the message to others and again to several couples and four kids further along at Mountain Lodge. A man there thought the fire was at Kilmore until Adrian pointed out the burning gutter from an ember ahead of the firefront. 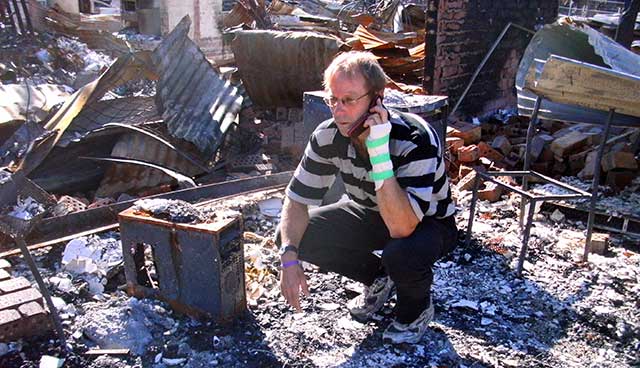 Up Falls Road, he persuaded John and Pat Beggs to get down to the oval, rather than sheltering in the house. Raced up Pack Road, he returned to Mountain Lodge to check on the situation. One couple and four kids were still packing, to Adrian's consternation. "Get the f... out of there! You're gonna die!" A visiting missionary remained behind and there she died. Back up Falls Road to check the Beggs had left, he returned via the oval to see the convoy leaving. At Kooringa Resort he told Monica to get down the oval and persuaded four guys not to defend the huge wooden complex. "Mate, you're gonna die!" he yelled above the howling wind.

He drove the circuit a third time, to check that those he had spoken to had gone. Houses were alight on Old Melbourne Road, nearby where he urged the police to leave also. The smoke suddenly thickened and he couldn't see a thing. In the dark he drove in first gear and nearly collided with a CFA tanker in Pack Road. Slowly they reached the safety of the oval at Gallipoli Park, where visibility moderately improved over the next half hour and other refugees arrived. 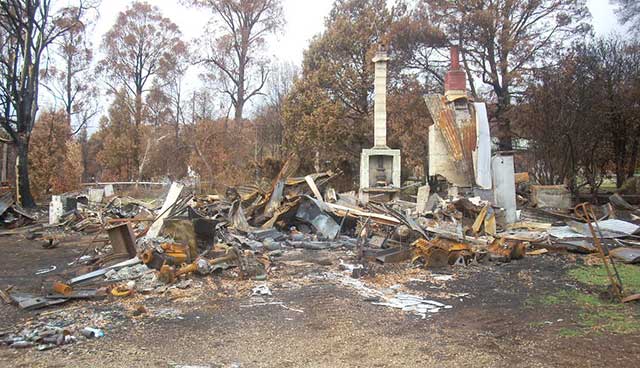 Adrian had never returned to his rented home when he left on that RACV call-out, and he lost over $100,000 of uninsured tools, household items and old cars under repair. Despite his advanced asthma, fed by his love of cigarettes, the forty-three year old made a valiant effort and he deserves special recognition. Through his ordeal he was conversing with his family numerous times on the phone and captured incredible footage of the events with his camera. Much more than anyone else, he warned people to evacuate and no doubt saved numerous lives.

The volunteers who committed to helping before the disaster, and those like Adrian who stepped up to the plate on the day, are shining examples of a community as it should be. The locals are the heart of our town and the willingness to be involved needs to be nourished in the rebuilding effort, to ensure the resurrection of a vibrant village. It's been a long year since Black Saturday and we have a fair way to go. At times it's wearisome, but there is a unique opportunity for anyone to join in a pioneering, dynamic and caring community.